Due to low river levels transport by ships is affected. Photo: Twitter.

This summer central and northern Europe were affected by extreme drought. It resulted in very dry soils, low groundwater levels and empty freshwater reservoirs. According to the European Drought Observatory (EDO) record breaking low levels on the River Rhine were causing major disruption to river shipping. European water professionals have been active all summer to divide scarce water resources.

EU countries particularly affected by the drought are Belgium, the Netherlands, Germany, Ireland, Sweden, Norway, the UK, Hungary, Poland, Switzerland and Denmark. In combination with high temperatures, drought affected agriculture, energy and water transportation sectors. The heatwave in July imposed restrictions or shutdown to nuclear power plants in France, Sweden, Finland, Germany and Switzerland. They reduced their production because of cooling problems.

Salinisation
High water temperatures further led to impacts on water quality and fish populations. Loads of fish had to be saved and brought to different waters. In Switzerland the army delivered 1.3 million litres of water to Swiss mountain pastures by helicopter. In the Netherlands water professionals were taking continuous measures to stop salinisation of rivers and freshwater reservoirs. For this purpose they were using an oxygen screen that pushes salt water upwards so it can be transported and discharged into the sea. 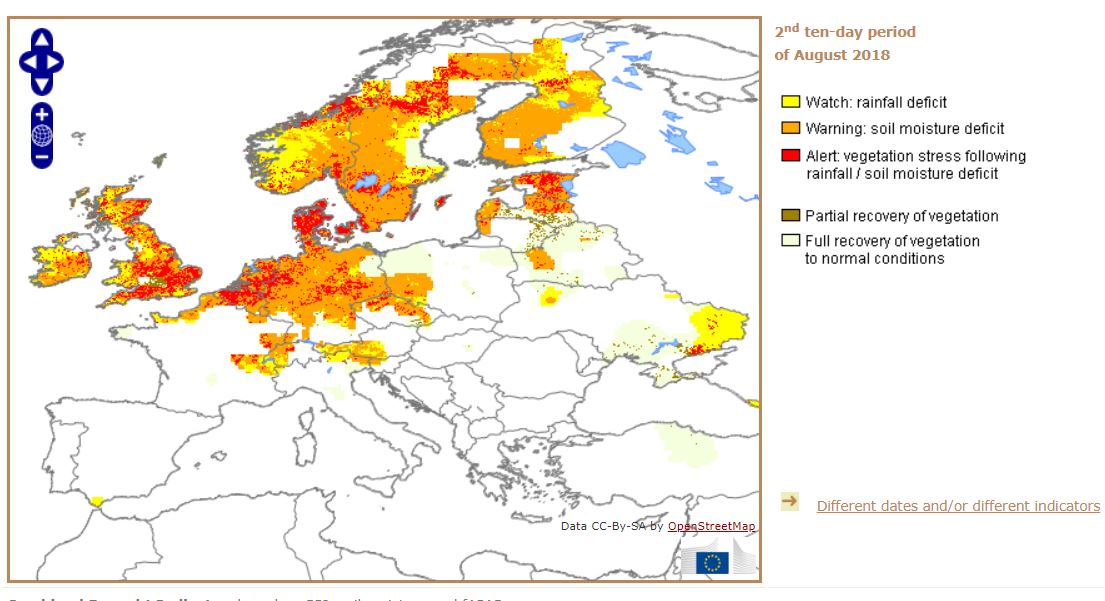 EDO recently published a drought report in which data of of August were used of Copernicus, Europe’s eyes on earth. The image shows central and north of Europe are still in a state of alert. Source: EDO-report.

Damage due to climate change
Last year the European Environment Agency (EEA) warned for the damage of climate change in their report Climate change, impacts and vulnerability in Europe 2016.

EEA stated back than that wet regions in Europe got wetter and dry regions drier. Glacier volume and snow cover are decreasing. At the same time, climate-related extremes such as heat waves, heavy precipitation and droughts, increased in frequency and intensity in many regions. Improved climate projections show that climate-related extremes will increase further in many European regions.