The documentary Brave Blue World is focusing on solving the world wide water crisis through water innovations and strong leadership. Inventors from all five continents show solutions for wastewater treatment and providing safe drinking water. Also three European innovators are presenting their innovations in the documentary that is now available on Netflix.

Director of innovation and Technology Frank Rogalla from Aqualia shows how in Chiclana in Andalusia, Spain biogas is produced out of wastewater. With the help of the European Union Aqualia started a project to stimulate the production of algae’s in so-called raceways. After a few days the algues are harvested through filtration and converted into biogas. The potential of this energy source is enormous. According to Rogalla putting the ponds all over Andalusia would be enough to provide 30 million cars in Spain with biogas.

Water treatment company Aquaporin in Copenhagen in Denmark is using membranes based on cells in the human body. All products contain aquaporins, the proteins responsible for transporting and purifying water in all living cells. ‘Billions of years of evolution have made aquaporins super-efficient and super-selective, far better than any man-made water filter’, states the company on their website. CEO Peter Holme Jensen: “We reuse nature’s way of filtrating water. One gram of  Aquaporin can filtrate hundreds of litres of water.” The Danish water treatment process is a complete new way of filtering water. They cover the surface of water with aquaporins and use forward osmose to extract clean water.

The last European company featuring in the documentary is Hydraloop from the Netherlands. They developed a system to recycle grey water in your own home. ‘Our water recycling system is a combination of six existing techniques. Bath, shower and washing machine water can be treated to be used again for flushing toilets, washing, gardening and pools’, explains Hydraloop co-founder Sabine Stuiver. Using the system can annually save up to 30.000 litres per household.

Executive producer and founder of Brave Blue World Foundation Paul O’Callaghan who spearheaded the documentary states his goal is raising awareness of the global water crisis to help fast-track potential solutions. He was beyond thrilled that Brave Blue World was released worldwide through Netflix. “It is now available to an audience of 193 million subscribers worldwide and in 29 languages.”

The documentary featuring the European innovators was produced thanks to the support of the global water community. Brave Blue World was produced by the Brave Blue World Foundation, in association with its production partners The Water Environment Federation (WEF), SUEZ Water Technologies & Solutions, DuPont Water Solutions, Xylem, L’Oreal, Aqualia and the Dutch Water Alliance. 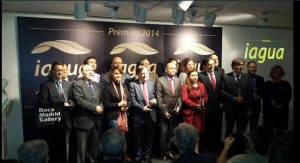