The EU-proposal to ban microplastics in products like cosmetics and paint could actually aggravate water pollution, declares the European environmental organisation EEB. According to them the ban on microplastics will start too late, in 2030 at the earliest. And the environmentalists fear the proposal is paving the way for the chemical industry to replace microplastics with nanoplastics.

The EU wants to tackle microplastic pollution as scientists warn it is turning into a ‘widespread risk’. According to the EEB the ban would prevent 10,000 to 60,000 tons of plastic ending up in the environment annually. The European Commission asked the European Chemicals Agency (ECHA) to prepare a proposal for a ban. In this proposal microplastics are defined as materials consisting of solid polymer-containing particles with a diameter smaller than 5 mm, to which additives or other substances may have been added.

The organisation of the European chemical industry Cefic emphasizes the need for scientific evidence on the dangers and risks of intentionally added microplastics to justify a restriction proposal. According to Cefic restrictions should only focus on those areas where unacceptable risks have been clearly identified. According to Cefic the impact of microplastics on water or soil should first be further investigated and then regulated.

According to the EEB the EU-proposal might inspire the chemical industry to replace microplastics with nanoplastics. ECHA recognizes that nanoplastic can lead to even more dangerous effects and bioaccumulation. Nanoplastics can be more harmful to human and animal health because ultra-small particles can easily enter and damage living cells. Nanoplastics are currently excluded from the ban.

In September 2018 the European Parliament (EP) approved a plastics strategy that aims to increase the recycling rate of plastic waste in the EU and called on the European Commission (EC) to introduce an EU-wide ban on intentionally added microplastics in products such as cosmetics and detergents by 2020. In addition they asked the EC and to take measures to minimise the release of microplastics from textiles, tyres, paint and cigarette butts. 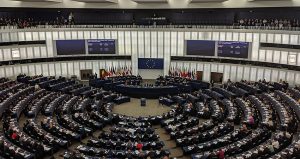 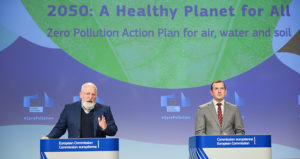