According to the Urban Waste Water Treatment Directive, which came into force in 1991, all sewage has to be treated before discharging it into surface water. This spring the European Environment Agency (EEA) reported 96% Europe’s bathing waters met the minimum requirements set out under EU rules in 2016. But with the summer season coming to its peak a different picture can be seen. On several coasts in Spain, Bulgaria, Ireland and France the discharge of raw sewage has been reported. 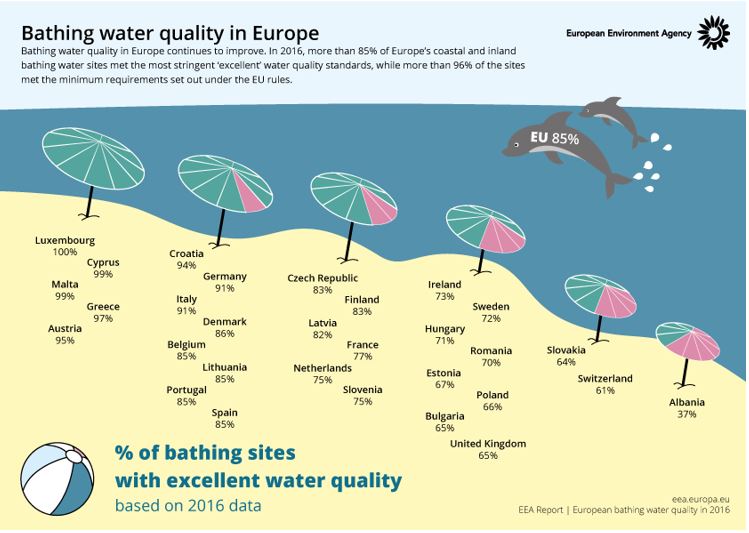 According to the latest EEA-report 96% of Europe’s bathing waters meet the minimum requirements. Illustration: EEA

Member States report
It remains unclear at how many locations raw sewage is discharged illegally into the sea. Water pollution is not only caused by illegal discharges but is also the result of non-compliant waste water treatment plants. The European Environment Agency is keeping an interactive map of all European WWTP’s. Only occasionally you will come across non-compliant treatment plants. The picture might be biased because the EEA has to rely on reports made by the Member States. And when you think of it, results can easily be manipulated by testing the water during the low season.

Blue Flags
The Foundation for Environmental Education (FEE) uses the criteria of the European Bathing Water Directive to award beaches and waters with ‘Blue Flags’.
Sophie Bachet Granados of FEE declares: “We are not particularly aware of illegal discharge within our network of awarded sites. It is the responsibility of the site management to take necessary actions if an accident happens. Site managers should liaise with the Blue Flag National Operator who is responsible for the programme in his country. We have a process in this sort of situation where we inform the public of the incident, and we inform the public and lower the flag until the pollution is passed. We also can receive some public complaints and in this case we ask the National Operator to investigate. If the pollution is averted, the Blue Flag flag is lowered.The Blue Flag is not misleading the public. All our sites have been tested and are tested during each Blue Flag bathing season.”

Public involvement
Antti Kaartinen of The European Envrionment Agency states EEA has not undertaken assessments on the Blue Flag label. “What we can see is that since its creation the Blue Flag programme has enjoyed steady growth in both the number of sites and the participating countries, and that it has expanded from focusing only on beaches to marinas and sustainable boating operators. In general, we encourage citizens to get more actively involved in protecting the environment and helping to improve Europe’s bathing areas.”

Inadequate water infrastructure
There are several reasons for discharging untreated wastewater into the sea. In many cases the existing WWTP’s are not prepared for the amount of tourists that visit during the summer. In Bulgaria’s Sunny beach the capacity of the treatment plant was never adapted. In Nerja in Spain a WWTP was constructed but the company that built the plant went bankrupt before the treatment became operational. And sometimes a WWTP cannot cope with all sewage due to heavy rainfall, thus the overflow of raw sewage is discharged into public waters.