Summer flood warnings in Germany, Belgium and the Netherlands

Due to heavy rainfall there are summer flood warnings in Germany, Belgium and the Netherlands. The river Rhine, Meuse and its tributaries are rising rapidly. The authorities in Germany and The Netherlands are providing citizens with sandbags. In the Netherlands campsites are being cleared and cattle is moved to other areas.

According to a computer model of the Dutch government (Rijkswaterstaat) the village Borgharen in Limburg will have to deal with extremely high water on Thursday evening and Friday night. According to Meteo Limburg, the forecast indicates that the river Meuse near Borgharen will rise 6.5 meters. Rijkswaterstaat itself has serious doubts about the automatic modeling. “That prediction is so improbable that we will make the calculations manually,” said spokeswoman of Rijkswaterstaat to 1Limburg.

In Germany the Baden-Württemberg Environment Agency (LUBW) predicts the river Rhine will soon overflow its banks. At Maxau, near Karlsruhe the water level of the Rhine exceeded the critical limit of 7.5 meters. That means that shipping traffic at Karlsruhe has to be shut down. The Rhine has now risen to 8.18 meters. But according to the LUBW even the milestone of a five-year flood (8.31 meters) can be reached in the course of this week.

The Waterways and Shipping Office expects that shipping on the Middle Rhine will be suspended from Friday. A water level of over 6.50 meters is expected in Koblenz from Friday. Shipping is prohibited from this critical level. The level could rise even further because of the announced heavy rains, it said. The water level in Koblenz was 4.34 meters on Wednesday morning – around one meter higher than normally at this time of the year.

Also several watercourses in Wallonia in Belgium have reached the high water alarm thresholds. The government service responsible for the Walloon waterways reported this on its website this morning. According to the latest update the flood risk applies to the rivers Ourthe, l’Eau d’Heure, l’Eau Blanche, l’Eau Noir, Lomme and Vesder and their tributaries.

In these countries summer floods are rare. In the Netherlands this kind of floods occurred for the last time 40 years ago. The past years central and northern Europe were affected by extreme drought during the summers. According to the European Drought Observatory (EDO) record breaking low levels on the River Rhine were causing major disruption to river shipping. This year the disruption will be caused by floods. 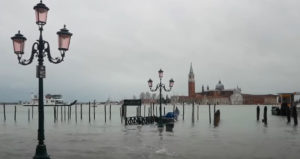 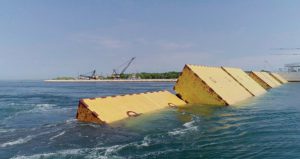