The European Commission sent a first letter of formal notice to Spain in December 2016 and a reasoned opinion in February 2020 asking Spain to fully comply with the Urban Waste Water Directive. Since than Spain has made progress, but it still needs to ensure collecting systems are installed in all the agglomerations. The Member State also needs to step up its efforts to make sure that wastewater is sufficiently treated according to the European treatment standards. It means there are agglomerations where infrastructure needs to be built or improved. This may require investments in building out new physical infrastructure or upgrading already existing treatment facilities.

Under the Urban Waste Water Directive (UWWTD) all Member States must provide secondary treatment of all discharges from agglomerations larger than 2,000-population, and more advanced treatment for agglomerations larger than 10,000-population in designated sensitive areas. Secondary treatment supplements the elimination of solid matter from urban wastewater with the breaking down of the organic substances by using bacteria. Sometimes, further treatment is required to protect sensitive water environments. This more stringent treatment can involve disinfecting the treated effluent to protect bathing or shellfish waters. It can also involve the removal of phosphorus or nitrates to protect waters that are threatened by eutrophication.

The European Commission published in September 2020 the 10th report on the implementation of the Urban Waste Water Treatment Directive. This report showed an overall improvement in collection and treatment of waste water in Europe’s cities and towns, but pointed to varying success levels between the Member States.

When it comes to the enforcement of the Urban Waste Water Directive more broadly, the Commission has so far identified serious breaches and initiated infringement procedures in 17 Member States, for various reasons. In 2021 the European Commission referred Slovenia, France and Hungary to the Court of Justice of the EU, and continued the infringement against Belgium, Greece and Slovakia. In February 2022 Poland and Malta were also referred to Court of Justice of the EU.

The Urban Wastewater Treatment Directive (UWWTD) aims at protecting the environment from the adverse effects of urban waste water coming from domestic and certain industrial sectors. Under the Directive, towns and cities are required to put in place the necessary infrastructure in order to collect and treat their urban waste waters, thus eliminating or reducing all their undesirable effects when they are discharged into water bodies. 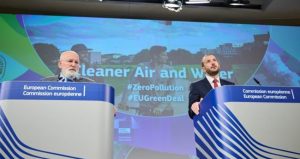