The Omicron-variant of Covid-19 is harder to detect in wastewater than the Delta-variant. In Canada, the Netherlands and Belgium lower levels of the virus were found despite surging cases. There appeared ‘no early warning’ or correlation with the increase of infections.

Wastewater testing in Canada was showing unexpectedly lower levels of virus despite an Omicron surge. According to the London Free Press reports Omicron is the dominant strain in the London area, but the discovered the viral levels in wastewater collected from five local sewage treatment plants are lower than anticipated despite the record-breaking number of reported cases. “In wastewater the quantity of the virus doesn’t look as high as what we saw with Delta,” said Eric Arts, project lead and professor of microbiology and immunology at Western’s Schulich School of Medicine and Dentistry.

According to Arts the disconnect requires further study. He thinks that Omicron isn’t making people sick enough to generate large viral loads that end up in sewage. “If the virus is less virulent, it is quite possible that less virus is being shed through the intestinal tract and with fecal material into the wastewater supply,” said Arts.

The findings of the National Institute for Public Health and the Environment (RIVM) in the Netherlands are the same. The number of infections is sky high but there is no visible spike in wastewater data. Just like the Canadian researchers the Dutch institute RIVM does not really know why Omicron does not show up in wastewater data. They are thinking vaccinations might influence the results. In Belgium the same results are found by the University of Leuven and like the Canadian and Dutch researcher they do not have an explanation yet.

In the beginning of December the Danish Serum Institute (SSI) detected the new omicron variant for the first time in wastewater samples from a treatment plant on the Island Funen. Unlike in other countries in the weekly Danish SSI reports there appears to be an evident correlation between infections and wastewater data. So comparing research methods will be very important in finding answers for the different results. 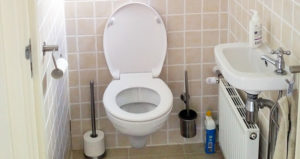