ECDC-Report: Increase of Legionellosis in Europe

The rate of reported cases of Legionellosis was the highest in Denmark, The Netherlands, Italy and Slovenia. Source: ECDC.

In the year 2017 the number of Europeans affected by the legionella bacteria increased with 30 per cent compared to 2016. The overall notification rate increased from 1.4 to 1.8 on a population of 100.000. The risk of getting ill is the highest in Denmark, The Netherlands, Italy and Slovenia. In these countries on a population of 100.000 the rate is higher than 3. Slovenians were running the highest risk with a rate of 5.2. This is shown in the annual Epidemiological Report for Legionnaires’ disease of the European Centre of Disease Prevention and Control (ECDC).

According to the report in 30 countries 8624 cases were classified as confirmed of which 574 were reported to have a fatal outcome. No large outbreaks contributed to the high number of reported cases. Most cases were sporadic and community-acquired and the disease mostly affected males 65 years and above. France, Germany, Italy and Spain, accounted for 68% of all notified cases, although their combined populations only represented approximately 50% of the European population. Similar to previous years the majority of the cases (58%) occurred between June and October. A peak of 1301 cases in September 2017 was the highest monthly number recorded ever. 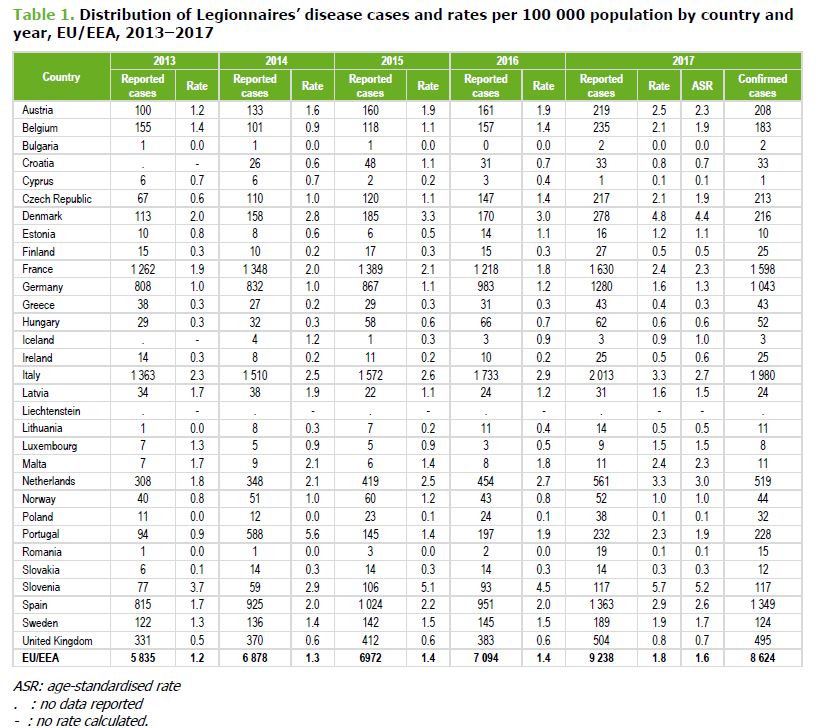 Climate change
According to ECDC the increasing trend is probably driven by several factors, including improved surveillance, an aging population, travel patterns and changes in climate and weather factors. Since the age-standardised notification rate also increased during the 2013−2017 period, demographic changes would only partly explain the trend. Weather conditions such as temperature, humidity and rainfall have been associated with higher Legionellosis incidence, probably through an effect on the bacterial ecology and/or an increased use of aerosol-producing devices or installations in the environment, such as cooling towers. A number of countries continue to have a notification rate below 0.5 and several even below 0.2 cases per 100 000, which likely represents underestimation of the incidence in these countries.

We use cookies to ensure that we give you the best experience on our website. If you continue to use this site we will assume that you are happy with it.OkéPrivacy policy